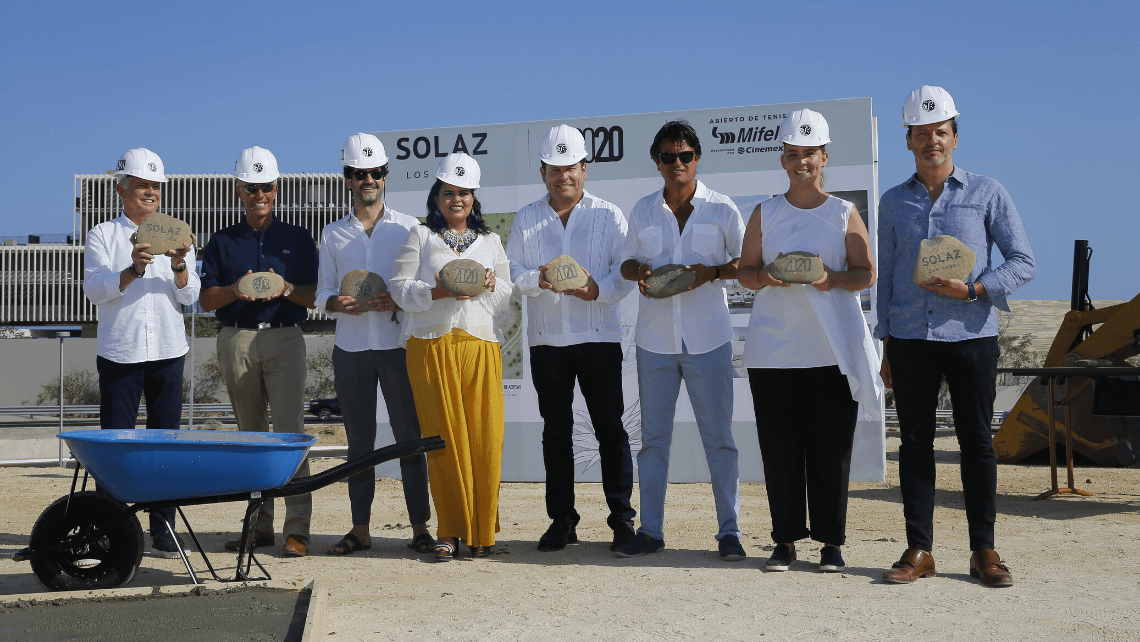 Since the year 2016, the Tennis Tournament ATP World Tour 250 Category has been celebrated in Los Cabos. During the last 4 years, along with Solaz Los Cabos as the venue, it’s been established and considered as one of the best tournaments in the ATP Tour circuit.
For this reason, Olarena Hospitality Group and The Mifel Tennis Open presented by Cinemex, would like to officially present the new “Tournament Venue Stadium” development project.
This project with an investment higher than five million dollars will be carried out in partnership between Solaz Los Cabos and Mextenis. Marking the first step, the “First Stone Laying Ceremony” was celebrated on August 3rd at the place where the new complex will be built, right in front of Solaz Los Cabos, located on the Tourist Corridor San José del Cabo – Cabo San Lucas. It is planned that the new stadium opens its doors next summer 2020.

​This Ceremony was attended by the Tournament Director, José Antonio Fernández, by Rafael de la Mora, CEO of Olarena Hospitality Group, as well as by owners of Solaz Los Cabos, along with special guests such as Renata Burillo, President of the Board of Directors of Pegaso Group; Luis Araiza, Secretary of Tourism of Baja California Sur; Jesús Armida Castro, Mayor of the Municipality of Los Cabos, as well as Héctor Barroso, the Architect responsible for the construction of this new complex.

“Just like we promised since our first edition, 2020 will be the year when we´ll conclude the project that we began 5 years ago”… “After debuting on the right path with the Tour, within four years we´ve managed to establish ourselves as one of the best events in the ATP 250 category. Thanks to our partner, the Olarena Corporation, we already offer the Tour´s best hotel and next year we´ll present a complex that will offer a unique experience for both, the players and the enthusiasts”, Fernández commented.   ​

On the other hand, this new complex will serve as a location for other events, since the stadium can hold up to 5,000 guests; plus, it offers a stand with a capacity for 1,500 spectators, open spaces and 4 courts for games and entertainment. The modern architecture and the endemic natural surroundings will make this complex simply spectacular.
“It´s an honor to form part of this great project where we´ll become the Official Venue of the ATP 250 Los Cabos and it will also provide us with the opportunity to receive other events throughout the year”, stated Rafael de la Mora, CEO of Olarena Hospitality Group.
“We´ve been working on a project that will surprise many people, not only for its design, but also for the elements and materials that will be used for its construction”, stated Architect Héctor Barroso. “This complex will offer a corridor that will connect the Stadium to the alternative courts in the commercial area, which will facilitate the access and experience of the spectators”.  ​
“Up to the year 2019, only Acapulco, Dubai, Umag and Stockholm offered the convenience of the having the hotel and the tournament on the same site, but starting next year, Los Cabos will be a tournament that will have everyone taking and wanting to attend as a result of the wonderful venue we´re developing”, concluded the Tournament Director.
Solaz Los Cabos and Mextenis would like to invite you to enjoy the next tournament that will take place from July 20 through 25, 2020.
​Be a part of this adventure!
The hotel is currently closed to address immediate and unanticipated infrastructure needs. Guests are being contacted directly to assist with rebooking existing reservations.